In October, Google released a new suite of icons for its popular apps including Gmail, Calendar, and Drive. The plan was good: Unify Google’s brands with icons that match one another with the same basic color treatment Google is known for. But the execution was questionable. People complained that the icons matched so much, you couldn’t tell them apart. Indeed, at a glance, it can be hard to tell Maps from Drive from Home. Even Jennifer Daniel, a designer at Google, expressed frustration at the new look:

I have straight up given up trying to “find” the google maps icon on my phone and just trust I’m biking in the right direction. I am free!!!! https://t.co/2i3OgZPx6O

And then there was another issue: The Gmail logo, formerly a white envelope, was now a multicolored “M.” It simply looked off.

You are reading: Gmail has a new logo that’s a lot more google

Now, thanks to Evan Blass, who publishes photos of leaked phones for a living, we know why. Blass is not a professional designer, but he rebuilt the Gmail logo in a way that makes more sense. Take a look: 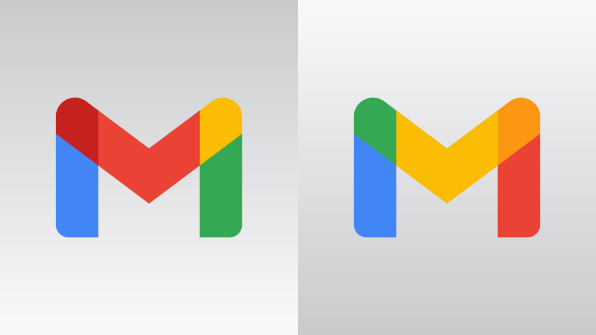 Google’s version (left) and Blass’s redesign (right). What’s different? Google’s Gmail logo creates an illusion that the colors blue and red, and red and green, are overlapping. But where they should overlap, Google didn’t blend the colors consistently. Instead, Google designers mix blue and red to make scarlet (where purple should go!), and red and green to make yellow (which is correct).

The other Google logos don’t blend colors at all. “Google has redesigned most of its app icons in much the same manner—but with the others, it’s clear that the colors merely represent contiguous, nonoverlapping segments,” says Blass. “With the Gmail ‘M,’ however, they segmented off the upper corners of the letter exactly where the lines overlap. So I think that made the lack of blending more prominent.”

Blass’s fix was to blend colors in all the overlapping segments, so blue and yellow make green, and yellow and red make orange. At a glance, Blass’s version is just less confounding to the eyes. Why didn’t Google take this approach in the first place?

When we reached out to Google last week, the company declined an interview on the new designs—but a spokesperson did share some clarifications on the intent behind the year-long design process of the new icons. First off, when designing the new Gmail logo, the company tried to tie it visually to the old logo, which was a red “M” on a white envelope. “A key focus was for us to modernize the icons while making sure to emphasize elements of the legacy apps that defined them, like Gmail’s classic M and prominent red color,” the company writes. 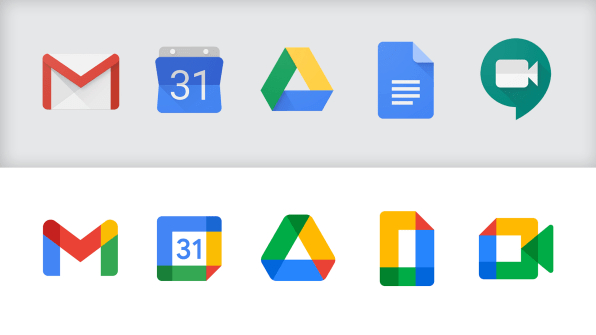 So that explains the red, but what about the color blending? Why doesn’t Google choose to use purple or, as Blass did, orange? I suspect it’s that Google’s brand colors are red, blue, yellow, and green. And while it’s tempting to blend them—since red, blue, and yellow are the three primary colors—Google technically can’t, unless it wants to introduce more colors to its brand.

Read more: How To Add A Signature In Gmail (A Step, How To Fix A Gmail Signature Image Not Showing

The Gmail logo is suggestive of a larger problem in the redesign: It elevates consistency above all else. Consistent branding can help create a coherent identity, but it’s not the only relevant factor. Google’s new logos look like a pile of the same side-by-side graphics. And while they do successfully portray “Google” the company, they aren’t so successful at portraying what we actually value Google for: email, maps, and scheduling.

READMORE:  How to send group emails from your android phone

Mark Wilson is a senior writer at Fast Company who has written about design, technology, and culture for almost 15 years. His work has appeared at Gizmodo, Kotaku, PopMech, PopSci, Esquire, American Photo and Lucky Peach

What if walking around on your wood floors powered your home?

What the hell is going on in Texas?

Walmart takes another shot at delivering groceries in New York

1,000 workers are on strike. Why is Oreo tweeting about emojis?

Dystopian or necessary? This company can stop dangerous e-scooters remotely

How introverts can be productive in an open office

This is why your hourly workers aren’t coming back