Back in June, when the weather was still warm around these parts, we talked about the integration of Gmail with Evernote — combining what could be considered the best of web-based email and the king of note taking. The force behind that merger was Powerbot, and now it has upgraded its offerings, adding more features to the product.

If you aren”t familiar, Evernote recently received a huge update for its Chrome WebClipper app, adding an entirely new user interface and integration of new sharing features, as well as parts of Skitch — a type of Paint-style app that allows you to add text and other graphics to your clips.

Powerbot has added a host of new features, beginning with Dropbox integration. “After a lot of work we finally introduced our Dropbox-Gmail integration. Now you can both save and retrieve your Dropbox content directly within your favorite email app”, claims Dmitry Gorshkov, founder of the service and developer of the app.

Now, when you clip then you have the option to do so directly to Dropbox, meaning email clips that contain attachments will retain those files. 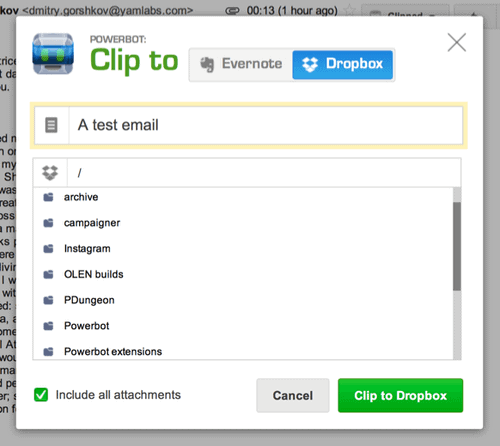 When you compose a new message, you will not have only the Evernote option, but will also get the opportunity to add from Dropbox as well.

In addition, the company added what it terms as “sexier meeting summaries, with participants” photos / social profiles” to its Google Calendar integration, and also added an Apple Mail plug-in to its offering.

Powerbot for Gmail is not free, but the fee is rather small — integration will set you back $1.99 per month and there is a free 30-day trial, so you can give it a shot without commitment. If your trial has expired however, there is a way to still get back in so you can see if the new features sway you. And if you pay annually, you save an additional 40% over the monthly price.

The extension is available for Firefox, Safari and Google Chrome at the time of writing.

If you are an active user of Gmail”s web interface, and also use Evernote or Dropbox regularly, then you may find the symbiosis between the services to your liking as it adds several tools to your arsenal that you can make use of to improve your workflow.

See more: Gmail – Difference Between Inbox And All Mail Con…

Alan is an avid fan of all things technology, including Microsoft, Android, Google, and more. When not writing about or using gadgets and software, he can be found on the trails hiking or mountain biking. More of his work can be read at Making Windows Easy. You can reach him on Google+ as well.

See Also:  How to select all messages in a yahoo mail folder