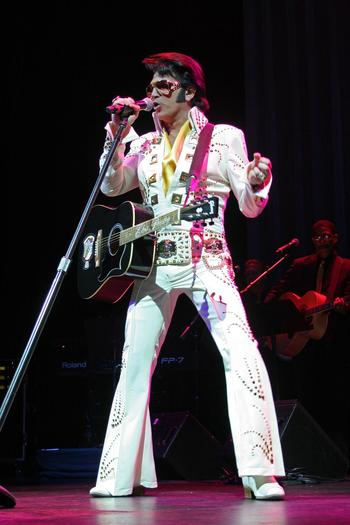 Chance has been a part of the Elvis Presley phenomenon since the late 1980s, when he was first discovered in Southern California by none other than Bill Medley of the 1960s ‘blue eyed’ soulful musical super duo, “The Righteous Brothers”.

Today, Chance continues to tour both nationally and internationally with his “Salute to Elvis” tribute show… Chance is more than your everyday Elvis Tribute Artist. He’s an accomplished actor, recreating a legendary character… As seen on stages across America, Europe and Asia.

Chance has also been seen in movies and television, including but not limited to: MTV, VH-1, HARD CORY, ENTERTAINMENT TONIGHT, ABC/CBS/NBC NATIONAL NEWS and multiple other international and regional ‘talk shows’.

See Also:  How to prevent emails from landing in gmail's spam folder

Chance’s secret is believing it’s not so much the voice that is most important, but it’s knowing how to become the man himself on that stage! It’s basically the attitude of Elvis Presley… Shy but confident… Knowing exactly what he’s doing!

“It’s not only a pleasure, but an honor to back-up Chance. He rocks’em just like the King!” ~Gordan Stoker THE JORDANAIRES: (Elvis’ back-up singers in the 1950s & early ’60s)

“Ha what can I say? He knows how to work that stage! He brings back to ‘life’ the essence of who Elvis truly was.” ~JD Sumner (Elvis’ back-up singer in the 1970s, and leader of “JD Sumner & The Stamps Quartet)

Chance worked for me at my club THE HOP in Fountain Valley California for years. I personally hand picked him from over the six dozen Elvii who auditioned for me. He’s really the best, better than what I thought I could ever find!” ~Bill Medley (The Righteous Brothers)

Elvis impersonator you always hear of, but the REAL THING.” ~ Chris Isaak (Singer/Entertainer)

“I’ve been coming to see Chance every week. He’s a great guy, a great singer, a lot of fun and a fantastic entertainer.” ~ Marisa Tomei (Actor/Oscar Winner)